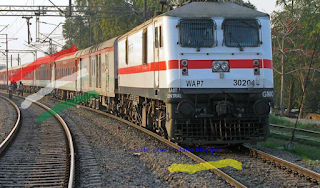 Though, every sanctioned project is very important for Nation, but to utilize the available resources in best possible manner to produce optimum social and financial gains to Nation, the projects are categorized as New Line National Projects, last mile connectivity projects, executable through put enhancement Gauge Conversion projects and Super Critical/Critical /Doubling/3rd Line/Quadrupling projects etc. However, in Railways there is no scheme named Pradhan Mantri Fast Track Project with the prescribed time-limit.

Thorough review of throughput enhancement projects has been carried out and with focused approach, the projects have been prioritized into Super

As on 01.04.2019, the balance length of Super Critical Projects is 2,347 Km and that of Critical projects is 5,676 Km. All out sincere and focused approach is being adopted by Railway for quick execution of these projects.

For the financial year 2020-21, Budget Outlay has been proposed to the projects which are in advance stage of completion, important new line National Projects, executable & Important Gauge Conversion projects and the projects which are important from the throughput enhancement considerations. Thus, the focused attention is given in fund allotment, rather than thinly spreading the resources without fruitful results.

In the overall interest of the Nation and to ensure that, projects are completed in time without cost overrun, lot of monitoring is being done in Railways at various levels (field level, divisional level, zonal level and Board level) and regular meetings are held with the officials of State Government and concerned Authorities to resolve the pending issues that are obstructing the progress of projects.

To ensure that projects are completed even before time, Railway has adopted the concept of incentives to the contractor in the form of bonus clause in contracts which will further enhance the pace of execution of projects.

The completion of any Railway project depends on various factors like quick land acquisition by State Government, forest clearance by officials of forest department, shifting of infringing utilities (both underground and over ground), statutory clearances from various authorities, geological and topographical conditions of area, law and order situation in the area of project site, number of working months in a year for particular project site due to climatic conditions, encountering unforeseen conditions like earthquake, flooding, excessive rains, strikes of labour, orders of Hon’ble Courts, situation and conditions of working agencies/contractors etc. and all these factors vary from project to project and site to site. Hence, no confirmed time frame can be fixed for completion of projects at this stage.

Please Register on our Blog and Post your article related with Education, News, Career etc.